Water purification is the process of eliminating unwanted chemicals, biological contaminants, suspended particles, and gases from water. The goal is to produce water that is acceptable for certain applications. Riddhi Siddhi Metal Impex is one of the leading Stainless Steel Purification Manufacturers in India. Although most water is cleaned and disinfected for human consumption (drinking water), it may also be used for a number of other reasons, such as medicinal, pharmaceutical, chemical, and industrial uses. Physical procedures like filtration, sedimentation, and distillation are utilized; biological processes like slow sand filters or biologically active carbon are employed; chemical processes like flocculation and chlorination are utilized, and electromagnetic radiation like ultraviolet light is utilized. 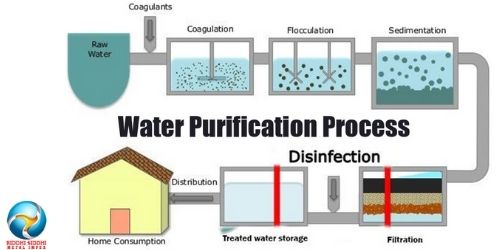 Water purification can lower the concentration of particulate matter such as suspended particles, parasites, bacteria, algae, viruses, and fungus, as well as dissolved and particulate matter. The specific steps and techniques of water treatment are determined by the type of raw water and the needed level of water quality.

Aeration eliminates smells and CO2. It also eliminates metals like iron and manganese by precipitating them as hydroxides. Raw water is collected in a big aeration tank and aerated by bubbling compressed air via perforated pipes.

During storage, microorganisms oxidize organic molecules in water. Similarly, during storage, bacteria oxidize the existing NH3 to nitrate. The aerated water is then kept in a settling tank for 10-14 days. Within 24 hours of storage, approximately 90% of the suspended particulates settle and the water turns clear. Certain more dangerous compounds settle down during storage as well. Similarly, harmful bacteria eventually die and the bacterial count drops by 90% in the first 5-7 days of storage.

To collect filtered water, there is a collecting tank at the bottom of the filter bed. During filtering, the filter bed is quickly coated by a slimy layer known as the crucial layer. Thread algae, diatoms, and bacteria make up the vital layer. Microorganisms in the crucial layer oxidize organic and other materials in the water during filtration. If NH3 is present, for example, it gets oxidized to nitrate. The vital layer also aids in microbial cell filtration. If the water has an unpleasant odor, activated carbon can be added to the filter bed to eliminate the odor.

Finally, disinfectants are used to purify filtered water. As an example, consider chlorination. Disinfectants destroy harmful microorganisms as well as other microorganisms in water. Following disinfection, the water is piped into an overhead tank for home distribution.

Cities We Supply EN1A Round Bar

Cities We Supply 11SMNPB30 Round Bar